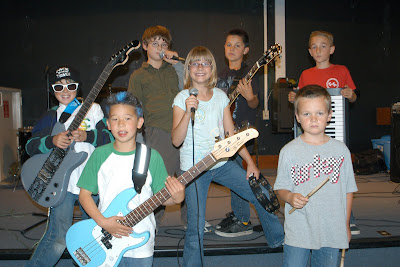 Posted by J Martin Sweet at 8:38 PM No comments:

Our new Physics and Chemistry class will begin next Tuesday, September 29th. The class will be held in the LIBRARY for the 7-week class. From the award winning nonprofit education foundation, Outdoor Science Exploration / Classroom Science Fun
op teacher with OSE/CSF, Irvin teaches 100+ popular science classes at local schools every year.
Active learning physics, chemistry, biology and geology with our hands-on approach! Essential concepts and special activities
Higher level thinking skills A Composition NOTEBOOK and 2 PENCILS are needed each class for take home materials. Check out Irvin Lindsey at: http://www.osefun.com/

Here is the list of students enrolled thus far:

Rio Rockers, Yellfire and The Exceeders!

Rio del Mar is fortunate to have three rock bands this year! The Rio Rockers will continue to add to their musical repertoire this year with four great songs by U2, The Cars, Led Zeppelin and Green Day. They will be performing in the community in the coming months ahead at Aptos High for a "Generations' Performance to benefit our high school's performing arts program on Saturday, October 24th. They will also join the Wild Rovers on Friday, December 18th for a big show at Don Quixote's in Felton.

A new band was recently formed with students ranging from 3rd through 6th grade. I was proud of all the students who tried out this year for the band. It takes a LOT of courage to stand up in front of everybody and give it your best. I was especially proud of three students in the new band who tried out last year, but didn't make it. They set a great example for the rest of the school to practice, practice and never give up! This new band is going to choose their name this Friday. They will be performing at a school assembly in December along with a couple of performances in the community.

Finally, I am happy to announce that I have added a new music teacher, Matthew Pinck, who has a variety of experience in Santa Cruz teaching instruments and leading youth rock bands. He will be taking over the helm of the Yellfire Band with all its members returning. These rock stars will also be performing in a winter school assembly and in the community in coming months.

Keep your eyes out and ears open for some amazing youth talent in music this coming year!

"Where kind hearts and open minds rule."
Posted by J Martin Sweet at 9:44 PM No comments:

Rio Musicians from the past